This is the last post that we will be making to ryancooke.mlblogs.com.

Starting today, www.defensiveindifference.com is open and ready to go.

Please tell people about this and let the world know.

Comment as well and let us know you’re reading!

Joel Sherman of the New York Post has reported on his Twitter Page that Carlos Beltran had osteoarthritis in  right knee and had surgery on that knee today. According to Sherman, Beltran had this surgery with out the permission of the team. Although, he does mention that there are conflicting reports. According to SNY’s Kevin Burkhardt, it will take 12 weeks before Beltran can return to baseball activities. It was reported last year that Beltran may require surgery, but now, as he began pre-season training, the pain began to show up again. According to Burkhardt, Beltran had this surgery done in Colorado by Dr. Richard Stedman, not Dr. David Alchuck, the Mets team doctor.

If it is true that Beltran went without Met permission, then this could cause a HUGE disaster internally.

This leads to the question: does Pagan or F-Mart get the right to play center field?

I think that will go all go down to Spring Training. Martinez will have to prove what he can do, but I think Pagan will win the job. He showed what he can do last year and I think he could really be a good player if he gets his head straight.

I believe Martinez is still trade bait for the Mets and they don’t want to play him at the major league level, at the risk of losing value.

Chances are Beltran won’t be back until May or June and until then, do you see an Angel in the Outfield or will you be seeing F-Mart drop F-Bombs in Citi Field?

Big news out of Flushing today! Ryota Igarashi is going to wear number 18……That was a joke. He really is wearing the number, but thats the most breaking news I’ve had to report this week. Thanks to Cerrone for the tip.

Sorry for the lack of posts in the time since the Jason Bay conference. It has been a very slow Mets news week. But, rumors are starting to surface about a possible Bengie signing as early as Friday. Also, the Piñero situation should heat up in the next few days.

So again, keep reading. And please, let us know you are out there. Comment on posts, we love to hear from you.

In a statement through the Assosciated Press, Mark McGwire said:

“I wish I had never touched steroids. It was foolish and it was a mistake. I truly apologize. Looking back, I wish I had never played during the steroid era. I never knew when, but I always knew this day would come. It’s time for me to talk about the past and to confirm what people have suspected. I’m sure people will wonder if I could have hit all those home runs had I never taken steroids. I had good years when I didn’t take any, and I had bad years when I didn’t take any. I had good years when I took steroids, and I had bad years when I took steroids. But no matter what, I shouldn’t have done it and for that I’m truly sorry. After all this time, I want to come clean. I was not in a position to do that five years ago in my congressional testimony, but now I feel an obligation to discuss this and to answer questions about it. I’ll do that, and then I just want to help my team. During the mid-’90s, I went on the DL seven times and missed 228 games over five years. I experienced a lot of injuries, including a ribcage strain, a torn left heel muscle, a stress fracture of the left heel, and a torn right heel muscle. It was definitely a miserable bunch of years, and I told myself that steroids could help me recover faster. I thought they would help me heal and prevent injuries, too. Baseball is really different now — it’s been cleaned up. The commissioner and the players’ association implemented testing and they cracked down, and I’m glad they did.“

This is big news to the world of baseball. McGwire hit 583 Home Runs in his career, including 49 in his rookie season and 70 in 1998.  While this is not surprising, it certaintly is shocking that he would come out with this now. He recently signed on to be the hitting coach for the Cardinals. This also comes only a few days after manager Tony LaRussa said that he would want McGwire to play a game this season 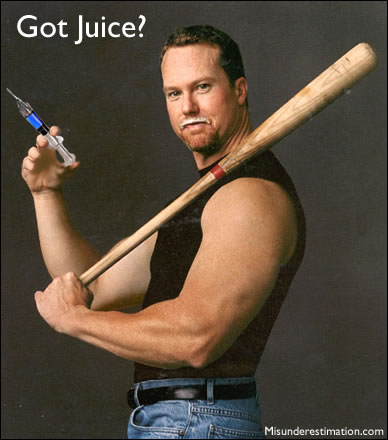 This does make you wonder what comes next.

I think McGwire should take the first half of Oprah and then have Tiger Woods take the 2nd half to talk about this.

I do think this is terrible for baseball, but at the same time is good. It is bad because one of the heroes of game was a cheater. But, it is good because it shows that we are starting to get over the “Steroid Era.”

Fasten Your Seatbelts baseball fans, this is not going away any time soon.

After an off day yesterday, The Ulti-Met World Series continues in 1969 blue and orange tiles Shea with Bob Ojeda squaring off with Gary Gentry. The action begins in the top of the second where the clean-up hitter, Gary Carter, singles. Darryl Strawberry is the next batter. Gentry gets ahead of him 0-2, but Straw fouls off three pitches and takes two balls, Straw takes the 2-2 pitch into left field, over Cleon Jones’s head. Two-run Homer, 2-0 86’ers. The bottom of the 2nd begins with an answer from the Miracle Mets. The number five hitter is Ed Kranepool. He takes a Ojeda fastball over the right field wall. 2-1 1986 Mets. The two pitchers trade zeros until the sixth inning. Mookie Wilson leads off the inning with a slow roller to third. Ed Charles comes in to field it, but has to pocket the ball as Wilson is already at first. Rafael Santana is the next batter. Gentry quickly takes care of him and Ojeda bunts Wilson over to second. Dykstra is the man up. He slaps a ball into left field. Not enough for Mookie to score though. With runners on 1st and 3rd, Wally Backman singles in Wilson, 3-1, 1986. Keith Hernandez is the next hitter and Gil Hodges gets his bull pen warm. Nolan Ryan has been warming up and it looks like this could be Gentry’s last batter. Keith takes a 0-2 pitch up the middle, driving in Dykstra. Hodges puts in Nolan Ryan to pitch to Gary Carter. Ryan walks Carter on 4 pitches and Strawberry is up with the bases loaded. He singles up the middle driving in Backman. Mookie Wilson, the man who led off this inning, strikes out on three pitches to end it too. The score remains 5-1 until the 8th. Davey Johnson pulls Ojeda after seven innings. With a four-run lead, Davey brings in Doug Sisk. Sisk gives up a lead-off double to Cleon Jones, followed by a single to Ed Kranepool. Jones scores, 5-2. The next batter is Art Shamsky. He takes a Sisk change-up into deep center for a two run homer. 5-4. Jesse Orosco is brought in and he quickly shuts the door on the inning one-two-three. The top of the ninth begins with a solo shot by Gary Carter off of new pitcher, Ron Taylor. That’s all the runs the 86’ers would need as Orosco goes back out there, and nails them down for the save.

Our blog is only 3 days old and yet we are already getting some really good reviews from people ranging from family and friends to actualy Mets and baseball insiders. Taking that into consideration, we have purchased a Go Daddy. com Domain name. It is currently being processed, but according to various websites, that could take anywhere from 1-78 hour window. This is because in an effort to save time and not have to transfer all of our posts, we are redirecting the page to our page.

Currently, as you know, we are located at www.ryancooke.mlblogs.com.

If all goes as planned, we will be now located at www.defensiveindifference.com.

So from all of us here at Defensive Indifference, thank you and keep reading. Tell your friends, tell people you don’t know, and spread the word.

We will leave you with this though

Game Two starts off with Ron Darling giving up a leadoff double to Tommie Agee. Wayne Garrett strikes out and the next batter is Cleon Jones who works out a walk. With runners on first and second, Darling gets Donn Clendenon to ground into a double play working his way out of trouble. The next five innings go by quietly as Darling settles down and Koosman is able to keep the 86’ers at bay. In the bottom of the sixth, Keith Hernandez takes a Koosman fastball the opposite way for a single. Gary Carter is the next batter, and he splits the outfielders and lines a double into right-center field. Hernandez has to hold at third as Agee catches up to the ball. Darryl Strawberry is up now and he hits one deep to right field. Ron Swoboda catches the ball at the warning track but Hernandez tags up and scores. 1-0 ’86. After striking out  Mookie Wilson, Koosman walks Ray Knight. With runners on corners and two out, Gil Hodges comes out of the dugout to give his starter a quick break. The eight hitter is Rafael Santana and Koosman is coming right after him. After getting in front of Santana 0-2, Koosman quickly falls behind 3-2. He then throws a changeup low and away. Strike Three. Inning over. In the top of the seventh, Darling begins to tire and walks the first two batters. Davey Johnson consults with Mel Stottlemyre and they decide to pull Darling. Ronny leaves the mound to a standing ovation from the 1986 Shea Faithful. Rick Aguilera enters the game and gets Bud Harrelson to ground into a 6-3 double play. With a man on second and two out, Hodges pinch hits for Koosman with Art Shamsky, who strikes out on four pitches.  Pinch hitter Kevin Mitchell leads off the bottom of the seventh with a pop out to third baseman Wayne Garrett. Lenny Dykstra is the Centerfielder and next batter. Nolan Ryan, who came out of the bullpen to relieve Koosman at the beginning of the half inning hangs a slider up and away and Dykstra takes advantage of it. Swoboda chases back but there is no chance. Home Run. Dykstra who only hit 8 homers in 1986 took the ball 20 feet over the right field wall. 2-0 ’86. That was all the scoring that was needed. McDowell came in to close out the game and the series was even at one. With an off day tomorrow, the Ulti-Met World Series continues on Thursday with Game 3 at 1969 Shea (Orange and Blue Tiles along the outer wall of the stadium and all.)

Defensive Indifference
Create a free website or blog at WordPress.com.